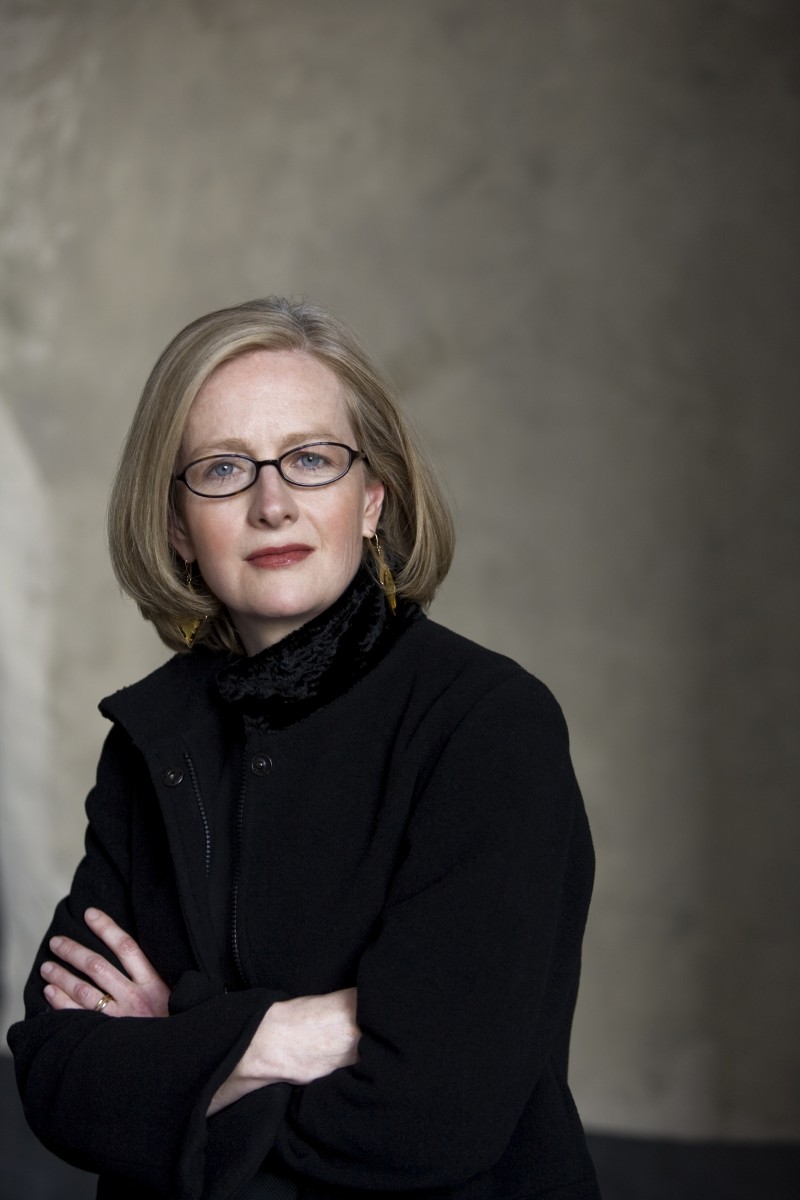 Virginia Opera: Orpheus in the Underworld

" I hadn’t heard conductor Anne Manson before, and all I knew of her was of her tenure with the Kansas City Symphony. She drew crisp, effervescent performances from everyone, balanced pit and stage perfectly and executed gradual tempo changes seamlessly. "

"...the delight of Humperkinck's music, which is brought into beautiful, full-bodied balance by conductor Anne Manson."

"Conductor Anne Manson led a considered, sensitively paced reading of the score, sustaining an even balance between voices and orchestra — a big challenge in this opera."

"[the] work was especially impressive where the orchestra was most crucial, in Janacek's brilliantly scored opera "Katya Kabanova," conducted by Anne Manson."

The Cunning Little Vixen …
"at Juilliard Opera resonated with Leos Janacek’s theme of the eternal renewal of nature. In this student production, more than 20 young Juilliard artists sang, danced and cavorted as the forest creatures of this fantasy opera. Emma Griffin’s staging imagined the forest as the snug interior of a craftsman-style bungalow. In the gorgeous orchestral finale, Anne Manson’s conducting left the audience in tears as the young animals ran offstage toward a beckoning white light."

"Anne Manson, who in recent seasons has become the conductor of choice for opera productions at Juilliard, understandably so, drew a glowing, textured and rhapsodic performance of Janacek’s wondrous score from the excellent Juilliard Orchestra. This 90-minute opera in three acts, performed without an intermission, flew by. Ms. Manson has worked with the San Francisco Opera, the Washington National Opera, the Minnesota Opera and other companies, just to mention American ones. Notably missing is the Metropolitan Opera, which has a woeful history of engaging female conductors."

"Even with the score’s spiky harmonies and manic rhythms, conductor Anne Manson revealed the eerie beauty of Janacek’s fleeting melodies."

"Portland Opera's Madame Butterfly soars....Portland Opera's heavy programming of well-worn works in recent years has given some of its patrons reason to grouse about the lack of less familiar fare, but it's easy to overlook the fact that one fresh performance can turn even an old production of a warhorse into a revelation...Anne Manson led the orchestra with taut direction and attentiveness to the singers...." -- Oregonian, February 4, 2012

“Anne Manson conducted with aplomb, finding comfortable balance for her valiant singers and maintaining an ongoing line in what might otherwise emerge as an episodic score” -- David Shengold, Opera Magazine, February 2012

Rejuvenating Opera with an Act of Dissent

"The spirited conductor Anne Manson drew an incisive, colorful performance of this demanding score from the Juilliard Orchestra."

"Conductor Anne Manson drew a feisty, immaculate performance from the orchestra and chorus and paced the proceedings expertly."

"Conductor Anne Manson makes Donizetti's orchestration sound better than it has any right to."

“An excellent recording….The vibrant Ms. Manson works effectively to bring transparency and balance to the orchestra, without loss of plush colors and harmonic intensity.” – The New York Times

“This is the best way to hear what I now believe is Glass’s most beautiful operatic work. Much of the credit goes to conductor Anne Manson...”– Wonders in the Dark

“Anne Manson leads this live performance...There is much overlapping between the real and the unreal and she allows us to follow it easily….Highest recommendations.” – Classics Today

“A definitive CD.…merits the attention of anyone interested in modern opera and surreal tales. Of course, it belongs on the shelf of any Glass fan.” – Opera

“Conductor Anne Manson keeps it all together, securely guiding the orchestra through the shifting meters. A fine accomplishment.” – The Oregonian

“An excellent introduction to Glass’s opera. The Portland Opera Orchestra play with polish and vigor under the baton of Anne Manson.  She allows Glass’s opera to unfold on its own terms, the musical values realized at the highest possible levels, and to say what it has to say in its own voice.” – Voix Des Arts

"The Best of the Year" – Opera News

“The performance was conducted by Anne Manson, who conveyed the drama and tenderness of Poulenc’s work magnificently....When it was over we agreed it was one of the most thrilling musical experiences we had ever had.”
--Howard Kissel, New York Daily News
http://www.nydailynews.com/blogs/culture/2010/04/odds-and-ends-2.html

"This is a conductor New Yorkers may particularly want to hear as she is certainly coming into her finest moments."

"The orchestral playing of Poulenc's score, in Anne Manson's capable hands, was thrilling."

Full review of Dialogues of the Carmelites

"...The four Portland Opera performances were recorded for the company's and the work's first CD release, so it's good news indeed that Orphée was well conducted, played and sung. Conductor Anne Manson and a thirty-musician orchestra brought precision and, increasingly as Act II progressed, a sense of rhapsody. Glass gave the two otherworldly characters stratospheric vocal lines, which soprano Lisa Saffer as La Princesse sang with radiant beauty, tenor Ryan MacPherson as Heurtebise with great clarity. Philip Cutlip brought a full baritone to Orphée, Georgia Jarman an incisive soprano to Eurydice. Tenor Steven Brennfleck sang plaintively as the young poet Cégeste, and there was strong singing by bass Jeffrey G. Beruan as a Poet, mezzo-soprano Daryl Freedman as Eurydice's friend Aglaonice and bass Konstantin Kvach as the Judge at La Princesse's trial."


"The conductor Anne Manson, in her American Composers Orchestra debut, did outstanding work in managing the program’s disparate elements, and the orchestra responded with estimable style and confidence."
--Steve Smith, The New York Times
http://www.nytimes.com/2010/02/01/arts/music/01roundup.html

"The conductor, Anne Manson proved to be a consummate artist, leading the group flawlessly through the melodic Spanish style songs... They brought impeccable technique and musicianship to their playing."
--Marvin Dickau

"The musicians performed with assurance, passion and precision...  [The performance was] full of nuance, energy and expression."
--Joanne Villeneuve

"The ensemble is an incredible, disciplined group of musicians."

“The music is beautifully rendered....The orchestra, led by Anne Manson (the Manitoba Chamber orchestra’s new music director), breathed in unison with Britten’s gently rising and falling music.
All of these elements combine to deliver an opera experience that’s close to being magical in this Midsummer Night’s Dream....one can simply sit back and marvel at the careful stage and musical direction behind this dark and delicious mix of old and new on an opera stage.”
--John Terauds, The Star
http://www.thestar.com/article/629712


“The music is beautifully rendered....The orchestra, led by Anne Manson (the Manitoba Chamber orchestra’s new music director), breathed in unison with Britten’s gently rising and falling music.
All of these elements combine to deliver an opera experience that’s close to being magical in this Midsummer Night’s Dream....one can simply sit back and marvel at the careful stage and musical direction behind this dark and delicious mix of old and new on an opera stage.”

The Manitoba Chamber Orchestra today announced the appointment of Anne Manson as its Music Director and Principal Conductor. The Washington-based conductor first came to Winnipeg to work with the Orchestra in 2006. Since then, Manson has led the MCO in concerts at the great venues in Canada and the United States.......

“In all, the program represented a fascinating concept whose real message was one of widespread ethnic preservation and suffering in the 20th century rather than the work of a single composer.  With Anne Manson leading the Manitobans at a ripping tempo, Bartok’s Rumanian Folk Dances demonstrated that the Hungarian composer was working on a course parallel with Gomidas.”
--Los Angeles Times

"....Anne Mansons skillful musical direction communicated affection for the piece in every measure."

"Anne Manson conducted the performance with great skill and sensitivity."

“The MCO finished the evening with a stunning performance of Bartok’s folk-inspired Divertimento for Strings.  Under Manson’s vigorous direction, the orchestra dug right into the generously meaty string writing, with concertmaster Karl Stobbe and principal cellist Yuri Hooker stepping up with gutsy and sonorous solos.”

“Thanks to…the urgent and sensitive conducting of Anne Manson, in her company debut, Vanessa emerges as an authentic American masterpiece.”

“Ms. Manson, who in 1994 was the first woman to conduct the Vienna Philharmonic in an opera at the Salzburg Festival, has broken into the   She approached “Vanessa” not like some neo-romantic artifact but as a substantive, intelligent and worthy contemporary work.” opera scene, and it’s about time.

“Anne Manson (in her company debut) leads the City Opera orchestra in a voluptuous, beautifully detailed reading of Barber’s perfumed score, with expressionistic ripples and flights from the winds.”

“Anne Manson made every moment arrive with unmistakably clear intentions.”

“As presented here, in a haunting production by Sam Helfrich, vibrantly conducted by Anne Manson, Mr. Glass’s work was the surprise hit: a rich, complex, and challenging experience.”

“Miss Manson managed to bring balance, clarity, and richness to the performance.”

“…Kaye Voyce’s costumes, complete with surrealistic touches, were beautifully appropriate to the work. So was Anne Manson’s conducting, which maintained the pulse of the opera and kept the orchestral writing clear.”

“The American conductor Anne Manson has stacked up some significant achievements in the international opera world. In 1994, she became the first woman to conduct the Vienna Philharmonic at the Salzburg Festival…This breakthrough came three years before this obdurately all-male orchestra hired its first female player.”

“Her performances have shown the trim, energetic, and efficient Ms. Manson to be an assured technician and insightful musician, an impression vividly confirmed during a rehearsal last week for Orphée aux Enfers...There was no funny business in her conducting of this smart, elegant, and frothy score. Everything was lithe, crisp, and clear, and the young musicians…seemed to follow her easily.”

“The good news is the splendid energies of these young singers and dancers, all generated from Anne Manson’s well-organized and pointed conducting. Her pit orchestra played with a unified resonance I am not used to hearing from these Juilliard ensembles of would-be superstars.”

“For many, the chief attraction was the conductor, Anne Manson. She untied every rhythmic and melodic knot of this naughty opéra bouffon with flair that buoyed both a splendid orchestra and an eager cast. She imposed fast tempos that never seemed rushed, transparent textures that never seemed precious. She sustained propulsion without leaving anyone breathless. It was an elegant achievement.”

"Ms. Manson, who in 1994 was the first woman to conduct the Vienna Philharmonic in an opera at the Salzburg Festival, has broken into the New York opera scene, and it’s about time. She approached “Vanessa” not like some neo-Romantic artifact but as a substantive, intelligent and worthy contemporary work."